Polaroid still fascinate many amateur and professional photographers. With this post I try to answer all those people who ask me what model to buy and what film to use.

When, in the first half of 1800, photography was invented the process to get the prints was long and required equipment and technical knowledge to which few people had access. Of course over the years have been discovered methods faster and simpler, but the real turning point was in 1947, thanks to an invention of Edward Land, the founder of Polaroid. Land created a system to impress particular films, that is developed and “printed” on their own. Been able to handle a print, without having to enter the laboratory, it was really a revolution.

Today, thanks to digital photography we can immediately see the results of our cameras, and optionally may also print photos with a photo printer. Developing the film is much faster thanks to fully automated laboratories. One might think that no one is still interested in the Polaroid. Even the Polaroid in 2008 stopped the entire production of instant film dismantling all its facilities. It would seem that, in addition to problems of falling sales because of digital competition, certain materials needed for production were no longer available.

Fortunately, a few entrepreneurs, under the name “Impossible Project, headed by Florian “Doc” Kaps, rescued at the last minute the last Polaroid instant integral film factory. To resume the production had to reinvent the “recipe” of the film to replace the materials became unavailable, but eventually they made it.

It would seem mad to invest money in analog photography at the time of maximum brightness of the digital technology, yet ….. On my old blog I was frequently asked questions related to the Polaroid, its cameras, films. Even when I go around with my Polaroid camera everybody asks me where to buy film. And finally even the Polaroid is due back its steps. Polaroid has probably noticed that it had lost its corporate identity abandoning analog, but now it’s in trouble: no longer industries to produce films, and so Polaroid asked to its new competitors to produce a stock for them. In the meantime (with a desperate move I would say) has dealed with the Fuji (at least that’s what I speculate, as I have not found any official communication) to produce and sell a clone of the Fuji Instax Mini.

So the actual situation is confused and so I decided to write this post to tackle the key questions that are asked me repeatedly: where to buy the film, which camera to buy, which films are needed on that specific camera, etc..

Obviously it will be impossible to clarify all doubts, as the Polaroid world is boundless, and I will surely miss something. However I will try to focus on what is most readily available today as Polaroid in the long years of its activity has created many types of films and cameras, many of which are now unavailable.

What film to use?

As I wrote, the Polaroid has stopped production of instant film. Notice that even if all the films show the expiration date on the package, when the films are kept in a refrigeerated place, they should be usable even after several years work. Obviously the colors become washed out. Furthermore, certain types of films are still produced by Fuji, and “Impossible Project is producing new films to replace those that are disappearing.

A first categorization is between “integral” and “pack”.

The integral films are those that are automatically ejected from the camera. Just wait a few seconds (the time varies depending on ambient temperature) and you will see the image magically appear. The cartridge in addition to films contains a battery to power the engine of the camera and the flash. This way the cameras which use integral film does not need batteries.

The most common integral film is the classic “600”, also branded as “779”. Each cartridge can take 10 pictures. The sensitivity of the film is 640 ISO. Do not confuse the “600” film with “669” or similar which I’ll discuss in a moment, because despite the similarity of the names are incompatible. 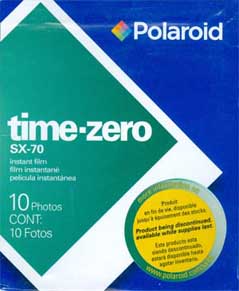 Another integral film is  Time-Zero, also known as TZ or SX-70. Note that the code “SX-70” used to identify this type of film is identical to the camera model. Unfortunately since 2006 it’s not in production . The ISO sensitivity is 150.

Although expired, these films were recently sold at amazing prices (more than 50 euros for one 10 pics cartridge) because they were the only ones to have a special ability to be physically manipulated! The most famous example is the cover of Peter Gabriel, known as “Melt“. The photo was made by the legendary Hipgnosis Studio (which also made covers for Pink Floyd) formed by Storm Thorgerson, Aubrey Powell and Peter Christopherson (Throbbing Gristle and Coil member).

For a brief period were produced film called SX-70 Blend that were the Polaroid 600, with an ND filter to “reduce” the sensitivity, in order to be usable in sx-70 cameras. They’re not manipulable.

Currently you can still find at a relatively affordable price (20 euros for a cartridge for 8 pictures), a Time-Zero variant called Artistic TZ, which is practically a Time Zero with washed out colors and manipulable. The sensitivity is 100 ISO. It could be used in the same cameras compatible with Time-Zero/Sx-70. Unfortunately there is an issue in the conservation of colors: after a few months the pictures turn green.

The pack films require a little more work on the user’s side, who must manually extract the photos from the camera via special strip of paper, and after few seconds to let the photo fully developing, must “detach” the negative from the actual printing. The developing time varies by temperature and film type. You can find the right developing time on the film package.

Each cartridge normally supplies 10 pictures, and does not include the battery, so the pack film cameras require the insertion of the batteries. Pack films are classified into type 100 and 80.

The Polaroid 100 have a rectangular format and are still readily available in several variants. Here we list the most common.

There is also a film, produced by Fuji, which is compatible with the 669. It’s called Fuji FP-100c and the colors look more saturated than the Polaroid film. The interesting thing is that Fuji has not discontinued the production of instant film. 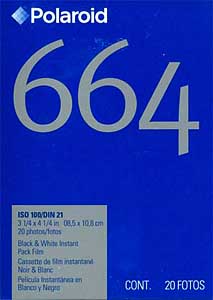 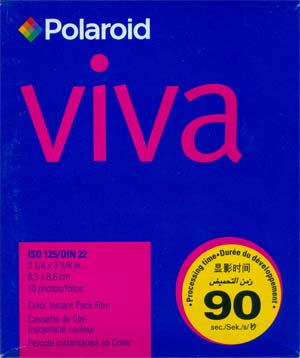 The Impossible color films.  The PX-70 is for the SX-70 and compatible cameras.

Film Summary
If you are interested in taking the classic Polaroid pictures, with the white stripe at the bottom, then you need to buy the 600 film, PX-70 Color Shade, PX-100, PX-600, Spectra / Image, PZ-600.

If you want to experience the thrill of the emulsion lift or emulsion transfers you should buy the 669 pack film or ID-UV. The 125i and Fuji for these techniques are not recommended.

Where to buy the films?

As I wrote earlier, the Polaroid has dicontinued the film production, but this does not mean that stocks are empty, and so you should be able to find some films in big stores. Otherwise there is the internet. Indeed, the Polaroid, when it decided to stop production, has contacted the old site Unsaleable, which was the only site specialized in Polaroid products and made a deal for the reselling of the last stocks of films. Through such cooperation Unsaleable became Polapremium. And it is the founder of Polapremium, Florian Kaps, that decided to fond the new company “Impossible Project. However, in addition to “Impossible Project“, you should find, the most common films such as “600”, even on standard photographic supplies websites.  If you’re interested in Fuji FP-100c, FP-100b and FP3000b, you could find them at the Fuji website. You can find a wide range of instant film on ars-imago.

What camera should I buy?

Once you choosed the film for your needs you need to choose the camera. Warning: The model naming is often confusing, therefore I advise you to look for precise answers on the Internet (eg on www.landlist.org) before purchasing any model or use the comments area below.

If you chose the 600 film and your goal is simply to take a dozen pictures and then put the camera in the closet to rot, then you can use any model among those that raged in the 80s (OneStep 600, 6xx SuperColor, Spirit etc…) These machines are very cheap because of the spread (usually 10-20 euros). These cameras require the Polaroid 600 film (or PX-600). These models (with some exceptions with auto focus) are very limited: plastic lens, fixed focus, flash always triggered, Galilean viewfinder.

For the 600 films there is the expensive alternative of the SLR 680 and SLR 690. As the name says, it’s SLR models and, to my knowledge, are the only SLR models that accept600 film. Unfortunately they cost a lot(around 100 euros or more).

But if you want to get good pictures, my two cents for the best performance/price rate is the SX-70. This camera has a beautiful design, it occupies relatively little space when closed, can focus on subjects close enough to target (a foot) and is a REFLEX (except the “SX-70 Model 3”). There are several variants including some with autofocus. Prices can vary greatly depending on the model and conditions (40 to 200 euros). 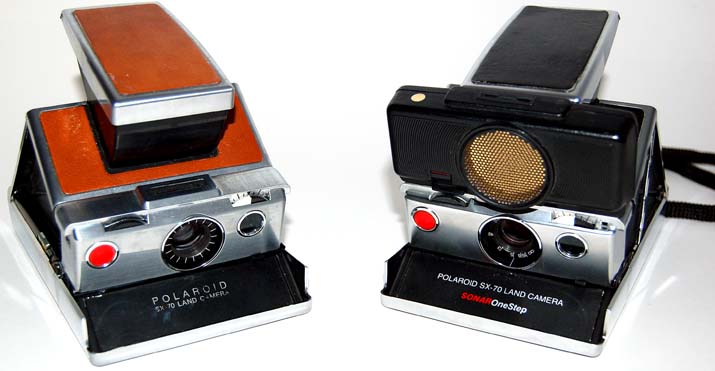 On YouTube you can find this wonderful video that explains the operation of the camera.

The most practical model for Pack films is the Polaroid EE-100 that is compatible with both film type 100 (rectangular picture) as 80 (square format), is powered by standard AA 1.5 V batteries and “folded” occupies little space. The price of used items varies from 15 to 100 euros. It ‘been marketed under various names including ProPack and Reporter. The only thing that I don’t like about this machine is the Galilean viewfinder.

The only valuable models (200$ and above) in this category are the Polaroid 180, 185, 190 and 195 being equipped with high quality lenses and manual exposure.

If you want a cheap camera for the 100 films than Colorpack II it’s a good choice for 10-15 euros. It is not folding, but requires standard batteries.

If you want the high end, you can consider the Polaroid 600 SE. It has excellent lenses that make it suitable for professional works. The price it’s about 300-500 euros or more, with all accessories. Another professional option is to use a large format camera with Polaroid back, of course the price increases even more.

Conclusion
I recommend a Polaroid SX-70 (all variants except the Model 3 which is not SLR) bought from Ebay priced up to 80-100 euros plus shipping, and use it, with films produced and sold from  “Impossible Project“ such as PX-100 (for white and black) and PX-70 Color Shade (for color).